An increase in the salaries of the bank employees due to new bank employee pay commission implemented by the Central Government will lead to deterioration of which of the following ratios:

A: Cost to Income Ratio -

Which of the following may lead to the deterioration in credit profile of a bank?
Statement 1. Bank"™s Capital adequacy falling below regulatory requirement.
Statement 2. Rise in Slippage ratio

During FY13, Small Bazar, a leading retail company has sold three of its prime properties for a sum of USD 24 Million. The same had a carrying value of USD 30
Million.
Analyst had considered the same as operating income and considered it to be part of operating expenses. However, she realized her mistake and recorded the loss as non-operating loss. Which of the following ratio will not change despite the correction?

A holder of which of the following types of bonds is least likely to suffer from rising interest rates?

The most important metric for a bank is the Net Interest Income (NII) which is the difference between____income and____expense.

Based on the common size statement analysis which of the following statement regarding employee cost is correct? 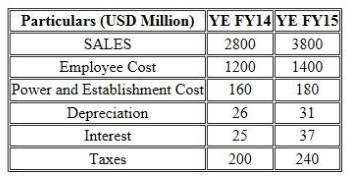 Butterfly strategy is a combination of

Awesome Mobile Ltd is a leading mobile seller who manufactures mobile phone under own brand Awesome. Which of the following is the biggest business risk for
Awesome?

In a weakening economy, which of the following is least accurate?

Which of the following is not an importance of the sovereign rating?
A: To arrive at cost of lending to a country
B: To set lower floor for the rating of the corporate and banks of the countries on international scale.
C: For determining the risk levels for international investment portfolios

Bank A has an imaginary portfolio of USD 1000 Million distributed towards following four entities:

Bank A is stipulated to maintain a capital adequacy ratio of 11% on its risk weighted assets. It is being stipulated that the ratings for all the four entities is expected to be downgraded by 1 notch each. Estimate the amount of new capital required for Bank A?