In a data analysis project, a set of sample XML documents are analyzed according to:

Explanation: In a Data Analysis project, you analyze a set of sample XML documents according to the content of the data.
Reference:http://www-
01.ibm.com/support/knowledgecenter/SSMKHH_9.0.0/com.ibm.etools.mft.doc/bd24240_.ht

A solution developer needs to implement a message flow to integrate with a
Telecommunications Short Message Service (SMS) serverwhich usesthe Simple Network
Management Protocol (SNMP) over a socket layer. The message flow starts with an
MQinput node which accepts the XML input message that contains the SMS details. The message is routed to a Compute node to compose the SNMP format as expected by the
SMS service.
Which node should the developer use to send the SNMP data?

The Integration Toolkit Adapter Connection wizard is used to create the resources that enable the WebSphere Adapters to connect to:

Explanation: Explanation:Use the Adapter Connection wizard to create the resources that enable the WebSphere Adapters to connect to an Enterprise Information System (EIS).
Reference:https://www-
01.ibm.com/support/knowledgecenter/SSMKHH_9.0.0/com.ibm.etools.mft.doc/ac37180_.ht

When using the IBM built-in node to output a file using WebSphere MQ Managed File
Transfer, which message tree must be used to override the node properties?

A solution developer is defining a DFDL model for a file that defines a purchase order. A field in the header,ItemCount, defines the number of purchase order items contained in the purchase order. The schema model is defined as shown below. 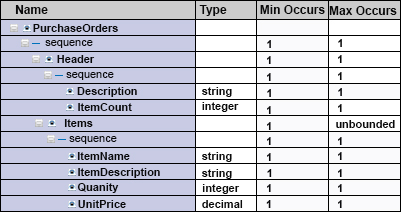 What modification must the developer make to the model to ensure that the number of items in the purchaseorder is equal to the value inItemCount?

A solution developer has created the flow shown in the exhibit below. The purpose of the flow is to receive notification messages, transform the message payload and send the messages via MQ to the Portal and DataWareHouse (DWH) systems. The developer has also implemented logic to handle various scenarios in the flow in order to trigger alerts on either theNOTIFICATION.CATCHor theNOTIFICATION.FAILqueue which are both monitored by operation support.

The following parameters and settings apply:
-> All messages processed by the flow are not-persistent messages.
-> The transaction mode in theNOTIFICATION.REQUESTMQInput node has been set toYes.
-> The transaction mode in theDWH.QRMQOutput node has been sent toNo.
During an MQ maintenance outage one of the destination queues,DWH.QR, was deleted by mistake. The next messagethat was processed caused an exception in theDWH.QRMQOutput node.
In this scenario, how many messages are sent out by the flow and to which queues?

Explanation: Use dynamic references during ESQL coding in order to improve the efficiency of message tree navigation.
Reference:http://www.ibm.com/developerworks/websphere/library/techarticles/0809_kudika la/0809_kudikala.html

A solution developer is using accounting and statistics data to find a performance issue withina message flow.
Which type of statistics should the developer use?

The embedded global cache in an integration node can be extended by connecting to:

In which situation can the IBM Integration Bus function as a component in a WebSphere
MQ based publish subscribe solution?
When it is necessary to:

A solution developer is implementing a message flow that transforms XML payment messages. Each payment message includes many individual payment transaction records.
Each transaction record has a summary section and a details section. For the mapping, only fields from the summary section are required.
What should the developer do to tune the performance of the message flow?

A solution developer needs to create or reconfigure the security identity to connect to a
Websphere eXtreme Scale secure grid.
Which command should the developer use to accomplish this task?

A solution developer has created the following message flow:

The integration requirements state that the name for the output file needs to be computed from the message payload.
How can the developer implement this requirement in the Mapping node?