You need to implement the file share for the new virtual desktop environment.
How should you configure the implementation? To answer, select the appropriate option from each list in the answer area. 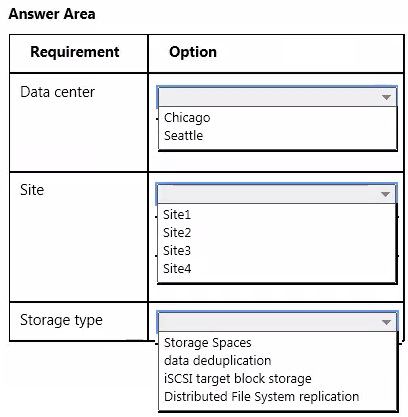 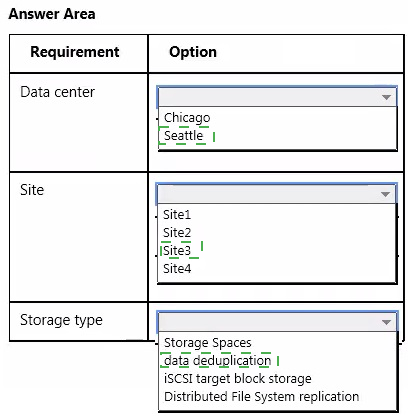 Explanation:
This should be Seattle, Site3, and Data Dedupe. VDI has heavy caching of temporary memory that can be mitigated a lot using the new data dedupe for CSV in 2012 R2.
Chicago again is on 2012 and not R2.

You need to configure access to the Certificate Revocation Lists (CRLs).
How should you configure the access? To answer, drag the appropriate protocol or servers to the correct network type. Each protocol or server may be used once, more than once, or not at all. You may need to drag the split bar between panes or scroll to view content. 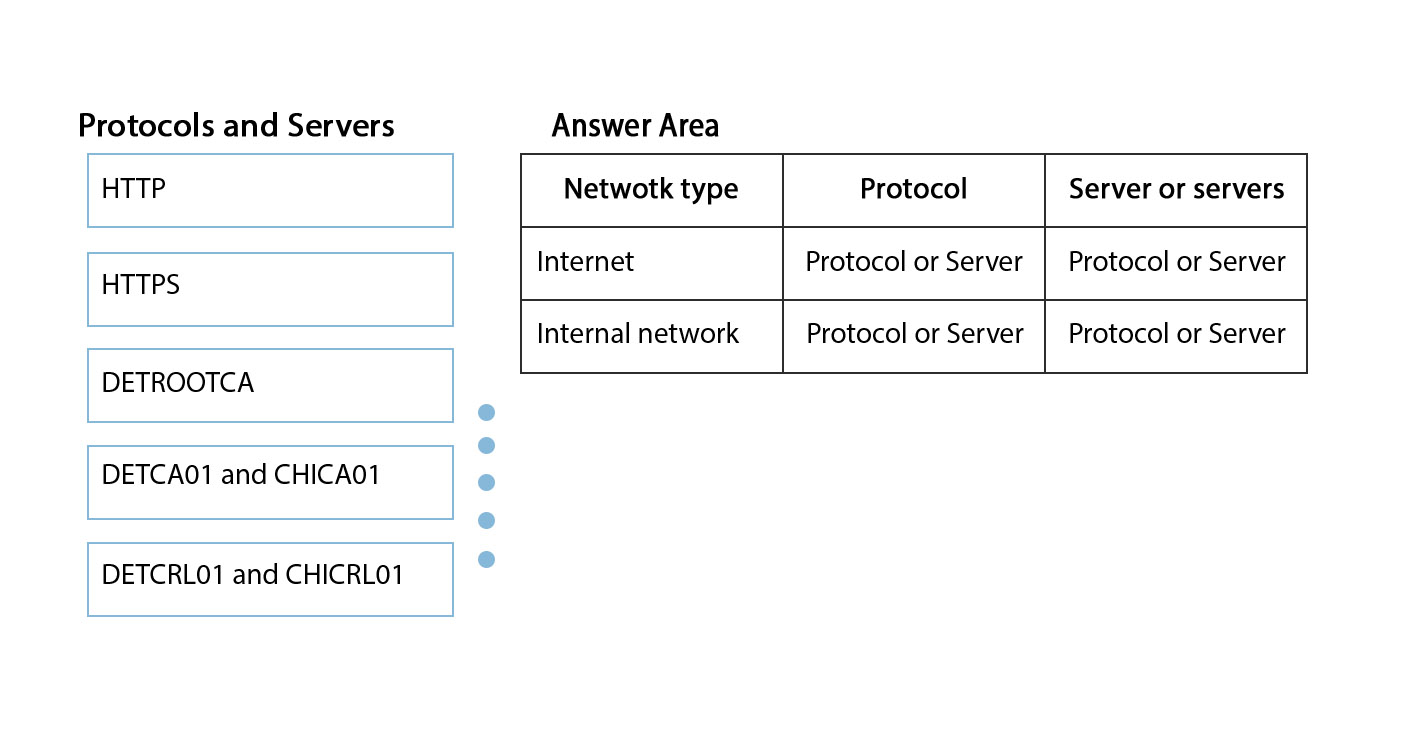 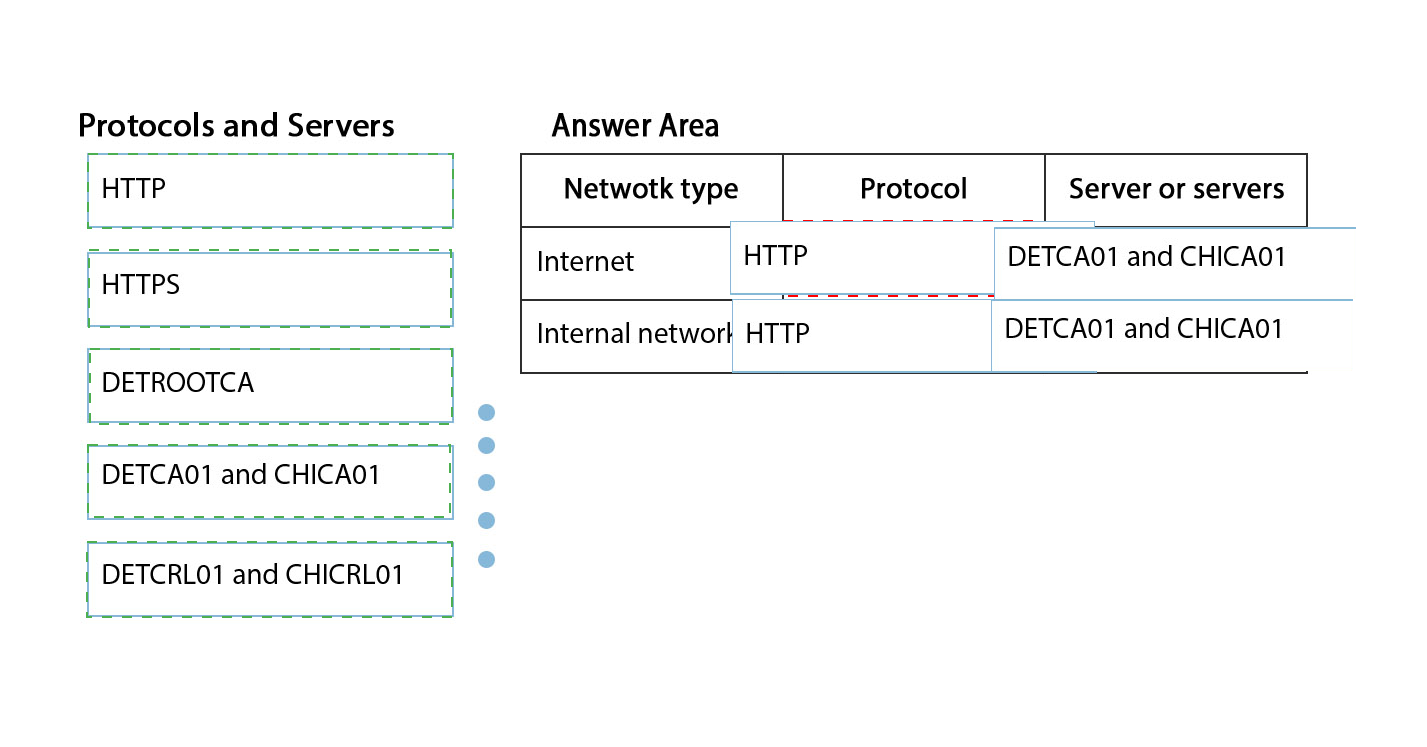 Explanation: * Scenario: The Seattle office contains a primary data center and a backup data center. The primary data center is located on a Hyper-V cluster named
Cluster3.contoso.com.
Any new VMs that are deployed to the Hyper-V cluster in Cluster3.contoso.com have the following requirements: New SQL Server VMs must be deployed only to odd-numbered servers in the cluster.
* The Add-SCCustomPlacementRule cmdlet adds a custom placement rule to the placement configuration for a host group.

You need to implement a new highly available storage solution for the Hyper-V environment. Which servers should you include in the scale-out file cluster?

You need to implement Windows Network Load Balancing (NLB).
Which three actions should you perform in sequence? To answer, move the appropriate actions from the list of actions to the answer area and arrange them in the correct order.

You need to collect the required security logs.
Which three actions should you perform in sequence? To answer, move the appropriate actions from the list of actions to the answer area and arrange them in the correct order. 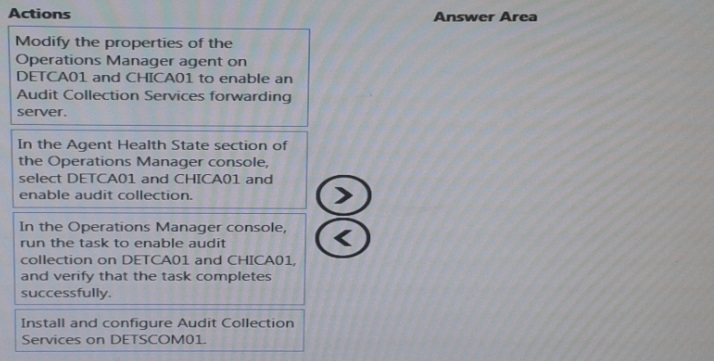 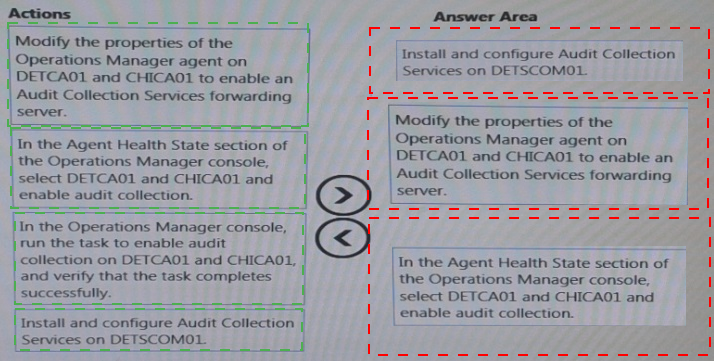 Overview -
Contoso, Ltd., is a manufacturing company that makes several different components that are used in automobile production. Contoso has a main office in Detroit, a distribution center in Chicago, and branch offices in Dallas, Atlanta, and San Diego.
The contoso.com forest and domain functional level are Windows Server 2008 R2. All servers run Windows Server 2012 R2, and all client workstations run Windows 7 or
Windows 8. Contoso uses System Center 2012 Operations Manager and Audit Collection
Services (ACS) to monitor the environment. There is no certification authority (CA) in the environment.

Current Environment -
The contoso.com domain contains the servers as shown in the following table:

Contoso sales staff travel within the United States and connect to a VPN by using mobile devices to access the corporate network. Sales users authentic

You administer an Active Directory Domain Services environment. There are no certification authorities (CAs) in the environment.
You plan to implement a two-tier CA hierarchy with an offline root CA.
You need to ensure that the issuing CA is not used to create additional subordinate CAs.
What should you do?

Explanation:
You can use the CAPolicy.inf file to define the PathLength constraint in the Basic
Constraints extension of the root CA certificate. Setting the PathLength basic constraint allows you to limit the path length of the CA hierarchy by specifying how many tiers of subordinate CAs can exist beneath the root. A PathLength of 1 means there can be at most one tier of CAs beneath the root. These subordinate CAs will have a PathLength basic constraint of 0, which means that they cannot issue any subordinate CA certificates.
Reference: Windows Server 2008 R2 CAPolicy.inf Syntax
http://blogs.technet.com/b/askds/archive/2009/10/15/windows-server-2008-r2-capolicy-inf- syntax.aspx

Your network contains an Active Directory domain named contoso.com.
You currently have an intranet web site that is hosted by two Web servers named Web1 and Web2. Web1 and Web2 run Windows Server 2012.
Users use the name intranet.contoso.com to request the web site and use DNS round robin.
You plan to implement the Network Load Balancing (NLB) feature on Web1 and Web2.
You need to recommend changes to the DNS records for the planned implementation.
What should you recommend?

A company has data centers in Seattle and New York. A high-speed link connects the data centers. Each data center runs a virtualization infrastructure that uses Hyper-V Server 2012 and Hyper-V Server 2012 R2. Administrative users from the Seattle and New York offices are members of Active Directory Domain Services groups named SeattleAdmins and
NewYorkAdmins, respectively.
You deploy one System Center Virtual Machine Manager (SCVMM) in the Seattle data center. You create two private clouds named SeattleCloud and NewYorkCloud in the
Seattle and New York data centers, respectively.
You have the following requirements:
-> Administrators from each data center must be able to manage the virtual machines and services from their location by using a web portal.
-> Administrators must not apply new resource quotas or change resource quotas.
-> You must manage public clouds by using the existing SCVMM server.
-> You must use the minimum permissions required to perform the administrative tasks.
You need to configure the environment.
What should you do?

Explanation:
Members of the Application Administrator (Self-Service User) ole can create, deploy, and manage their own virtual machines and services by using the VMM console or a Web portal.

You need to automatically restart the appropriate web service on DETCRL01 and
CHICRL01 if the web service is stopped.
Solution: You create a recovery task in SCOM and configure it to start the World Wide Web publishing service.
Does this meet the goal?

Your network contains an Active Directory domain named contoso.com. The domain contains four servers on a test network. The servers are configured as shown in the following table.

Server1 uses the storage shown in the following table.

Explanation:
Cluster1 is configured as a file share for general use and quick smb share. You cant place shared vhdx disks on quick smb, and its not recommended to store Hyper-V stuff on general use file shares.

Your network contains an Active Directory domain named contoso.com. You currently have an intranet web site that is hosted by two Web servers named Web1 and Web2. Web1 and
Web2 run Windows Server 2012. Users use the name intranet.contoso.com to request the web site and use DNS round robin.
You plan to implement the Network Load Balancing (NLB) feature on Web1 and Web2.
You need to recommend changes to the DNS records for the planned implementation.
What should you recommend?

An organization uses an Active Directory Rights Management Services (AD RMS) cluster named RMS1 to protect content for a project. You uninstall AD RMS when the project is complete. You need to ensure that the protected content is still available after AD RMS is uninstalled.
Solution: You enable the decommissioning service by using the AD RMS management console. You grant all users the Read & Execute permission to the decommission pipeline.
Does this meet the goal?

Explanation:
The proper procedure is:
-> Inform your users that you are decommissioning the AD RMS installation and advise them to connect to the cluster to save their content without AD RMS protection. Alternatively, you could delegate a trusted person to decrypt all rights- protected content by temporarily adding that person to the AD RMS super users group.
-> After you believe that all of the content is unprotected and saved, you should export the server licensor certificate, and then uninstall AD RMS from the server.

You install System Center 2012 R2 Virtual Machine Manager (VMM) on the nodes in
Cluster2.
You configure VMM to use a database in Cluster1. Server5 is the first node in the cluster.
You need to back up the VMM encryption key.
What should you back up?