Your network contains an Active Directory domain named contoso.com. The domain contains a domain controller named DC1 that runs Windows Server 2012 R2.
All client computers run Windows 8.1 Enterprise.
DC1 contains a Group Policy object (GPO) named GPO1.
You need to deploy a VPN connection to all users.
What should you configure from User Configuration in GPO1?

Explanation:
-> Open the Group Policy Management Console. Right-click the Group Policy object (GPO) that should contain the new preference item, and then click Edit.
-> In the console tree under Computer Configuration or User Configuration, expand the Preferences folder, and then expand the Control Panel Settings folder.
-> Right-click the Network Options node, point to New, and select VPN Connection.
The Network Options extension allows you to centrally create, modify, and delete dial-up networking and virtual private network (VPN) connections. Before you create a network option preference item, you should review the behavior of each type of action possible with the extension. 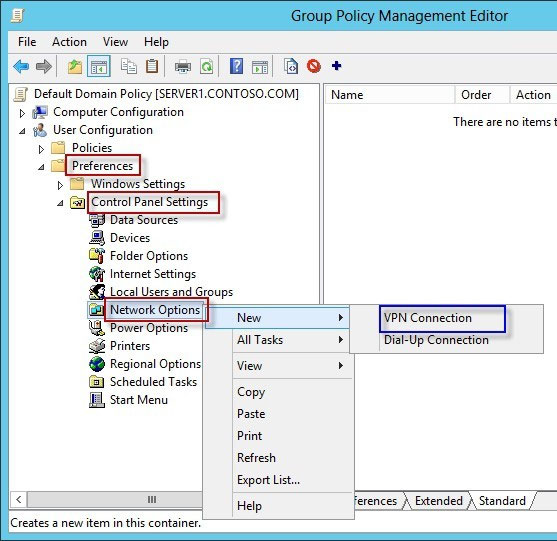 Your network contains an Active Directory domain named contoso.com. All client computers run Windows 8.1.
The network contains a shared folder named FinancialData that contains five files.
You need to ensure that the FinancialData folder and its contents are copied to all of the client computers.
Which two Group Policy preferences should you configure? (Each correct answer presents part of the solution. Choose two.)

Your network contains an Active Directory domain named contoso.com. All domain controllers run Windows Server 2012 R2.
You have a Group Policy object (GPO) named GPO1 that contains hundreds of settings. GPO1 is linked to an organizational unit (OU) named OU1. OU1 contains
200 client computers.
You plan to unlink GPO1 from OU1.
You need to identify which GPO settings will be removed from the computers after GPO1 is unlinked from OU1.
Which two GPO settings should you identify? (Each correct answer presents part of the solution. Choose two.)

Your network contains an Active Directory domain named contoso.com. All domain controllers run Windows Server 2012 R2. The domain contains 500 client computers that run Windows 8.1 Enterprise and Microsoft Office 2013.
You implement a Group Policy central store.
You need to modify the default Microsoft Office 2013 Save As location for all client computers.
The solution must minimize administrative effort.
What should you configure in a Group Policy object (GPO)?

HOTSPOT -
Your network contains an Active Directory domain named contoso.com.
You have several Windows PowerShell scripts that execute when users log on to their client computer.
You need to ensure that all of the scripts execute completely before the users can access their desktop.
Which setting should you configure? To answer, select the appropriate setting in the answer area.
Hot Area:

Your network contains an Active Directory domain named contoso.com. All domain controllers run Windows Server 2012 R2.
The domain contains 200 Group Policy objects (GPOs) and 100 WMI filters.
An administrator named Admin1 must be able to create new WMI filters and edit all of the existing WMI filters from the Group Policy Management Console
(GPMC).
You need to delegate the required permissions to Admin1. The solution must minimize the number of permissions assigned to Admin1.
What should you do? 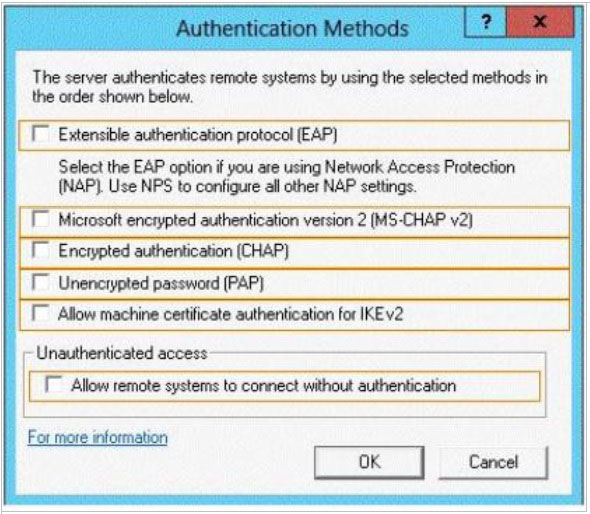 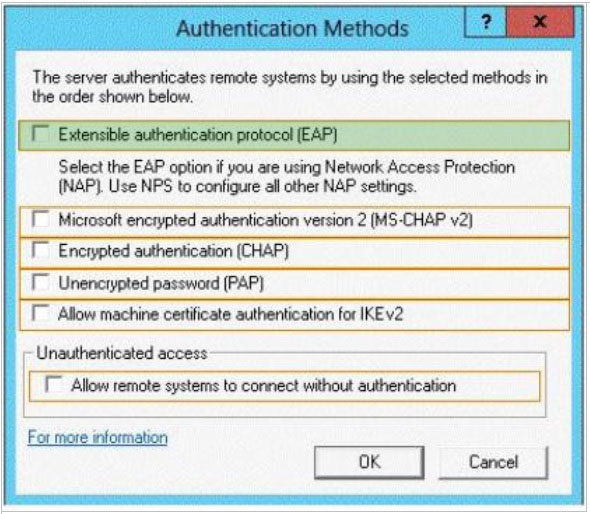 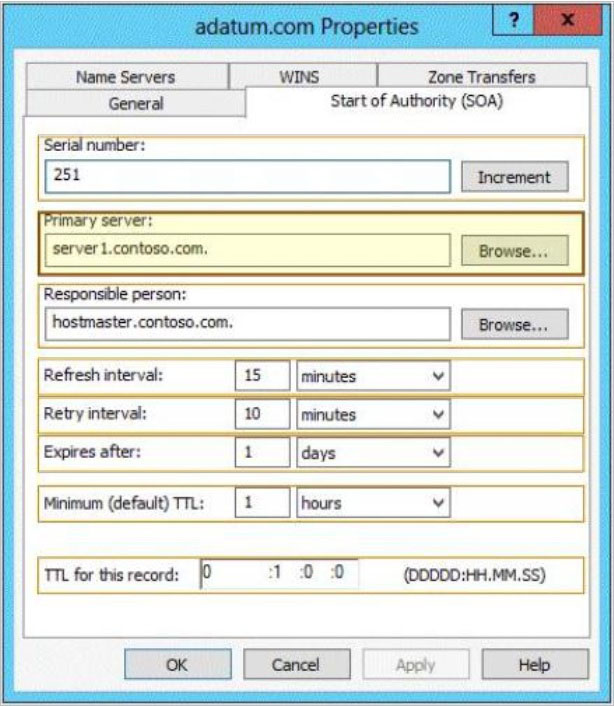 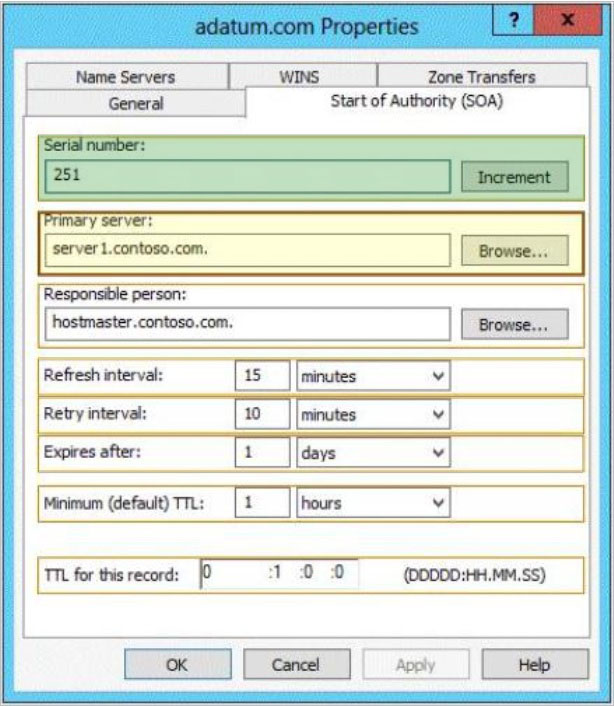 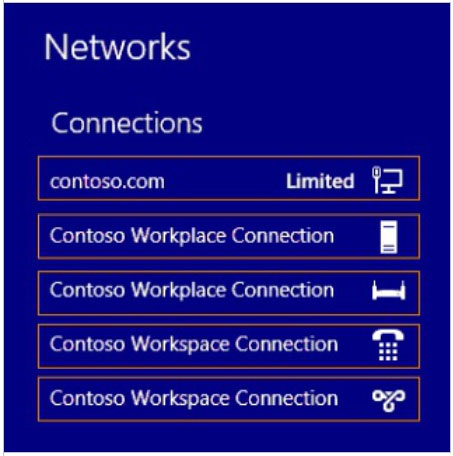 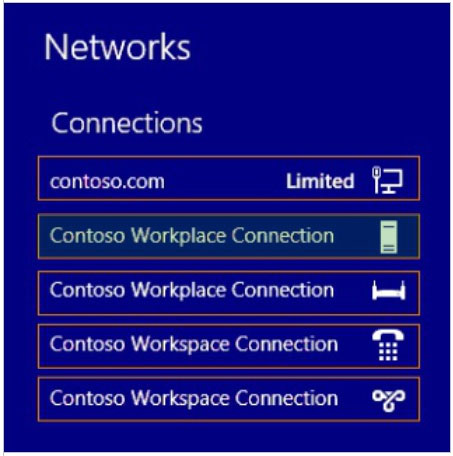 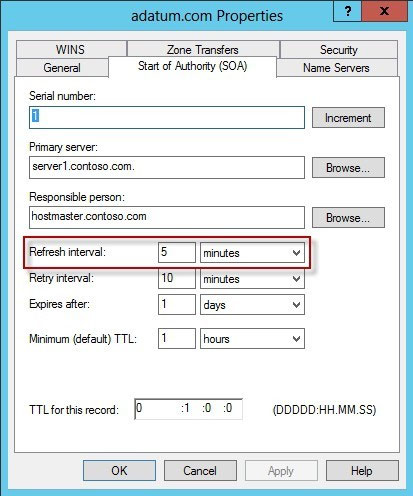 Your network contains two Active Directory domains named contoso.com and adatum.com.
The network contains a server named Server1 that runs Windows Server 2012 R2. Server1 has the DNS Server server role installed. Server1 has a copy of the contoso.com DNS zone.
You need to configure Server1 to resolve names in the adatum.com domain. The solution must meet the following requirements:
Prevent the need to change the configuration of the current name servers that host zones for adatum.com. Minimize administrative effort.
Which type of zone should you create? 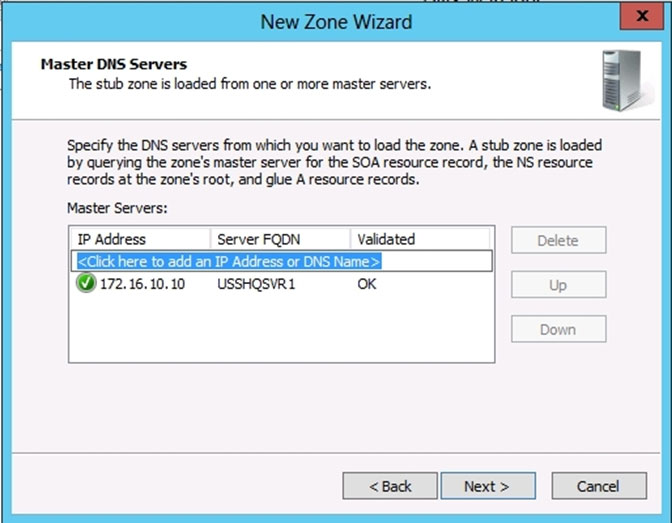 You can use stub zones to:
-> Keep delegated zone information current. By updating a stub zone for one of its child zones regularly, the DNS server that hosts both the parent zone and the stub zone will maintain a current list of authoritative DNS servers for the child zone.
-> Improve name resolution. Stub zones enable a DNS server to perform recursion using the stub zone's list of name servers, without having to query the Internet or an internal root server for the DNS namespace.
-> Simplify DNS administration. By using stub zones throughout your DNS infrastructure, you can distribute a list of the authoritative DNS servers for a zone without using secondary zones. However, stub zones do not serve the same purpose as secondary zones, and they are not an alternative for enhancing redundancy and load sharing.
There are two lists of DNS servers involved in the loading and maintenance of a stub zone:
-> The list of master servers from which the DNS server loads and updates a stub zone. A master server may be a primary or secondary DNS server for the zone.
In both cases, it will have a complete list of the DNS servers for the zone.
-> The list of the authoritative DNS servers for a zone. This list is contained in the stub zone using name server (NS) resource records.
When a DNS server loads a stub zone, such as widgets. tailspintoys.com, it queries the master servers, which can be in different locations, for the necessary resource records of the authoritative servers for the zone widgets. tailspintoys.com. The list of master servers may contain a single server or multiple servers, and it can be changed anytime.
References:
http://technet.microsoft.com/en-us/library/cc771898.aspx
http://technet.microsoft.com/en-us/library/cc754190.aspx
http://technet.microsoft.com/en-us/library/cc730980.aspx

HOTSPOT -
You have a server named Server1 that runs Windows Server 2012 R2. Server1 has two network adapters and is located in a perimeter network.
You need to install the RIP version 2 routing protocol on Server1.
Which node should you use to add the RIP version 2 routing protocol?
To answer, select the appropriate node in the answer area.
Hot Area: 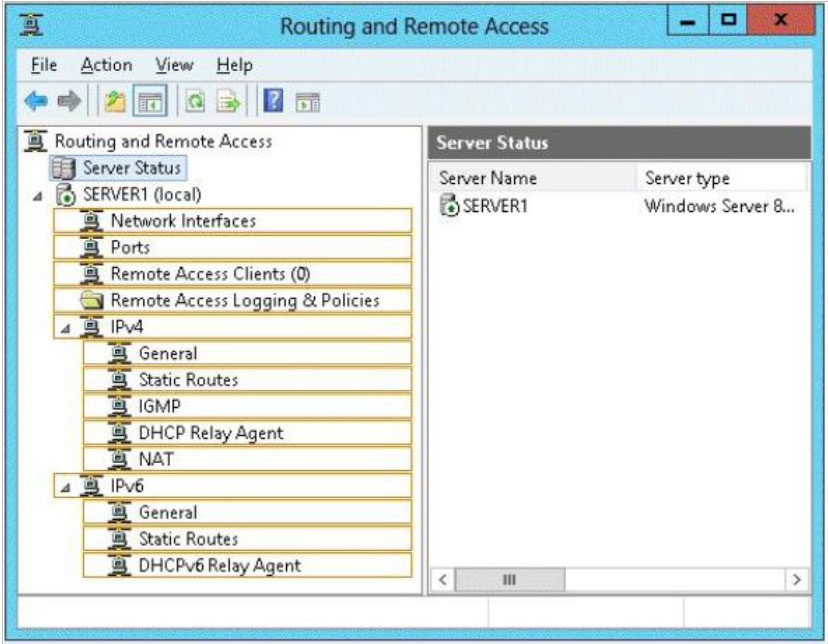 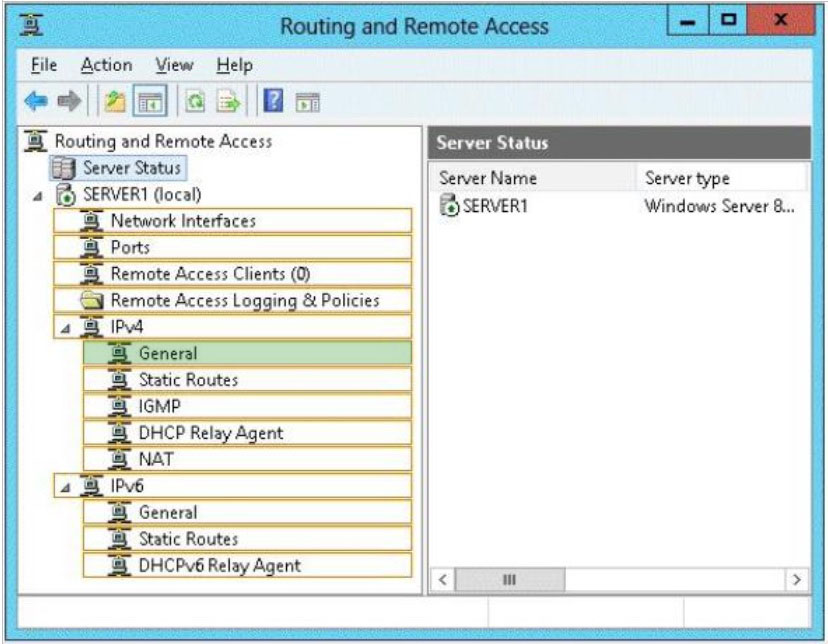 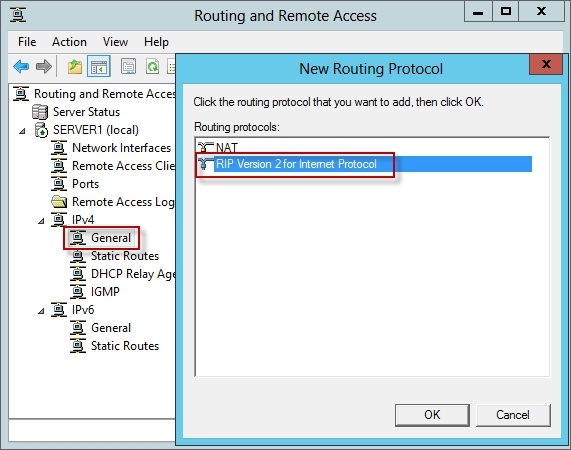 Your network contains an Active Directory domain named contoso.com. The domain contains a server named NPS1 that has the Network Policy Server server role installed. All servers run Windows Server 2012 R2.
You install the Remote Access server role on 10 servers.
You need to ensure that all of the Remote Access servers use the same network policies.
Which two actions should you perform? (Each correct answer presents part of the solution. Choose two.)

HOTSPOT -
You have a server named Server1 that has the Web Server (IIS) server role installed.
You obtain a Web Server certificate.
You need to configure a website on Server1 to use Secure Sockets Layer (SSL).
To which store should you import the certificate? To answer, select the appropriate store in the answer area.
Hot Area: 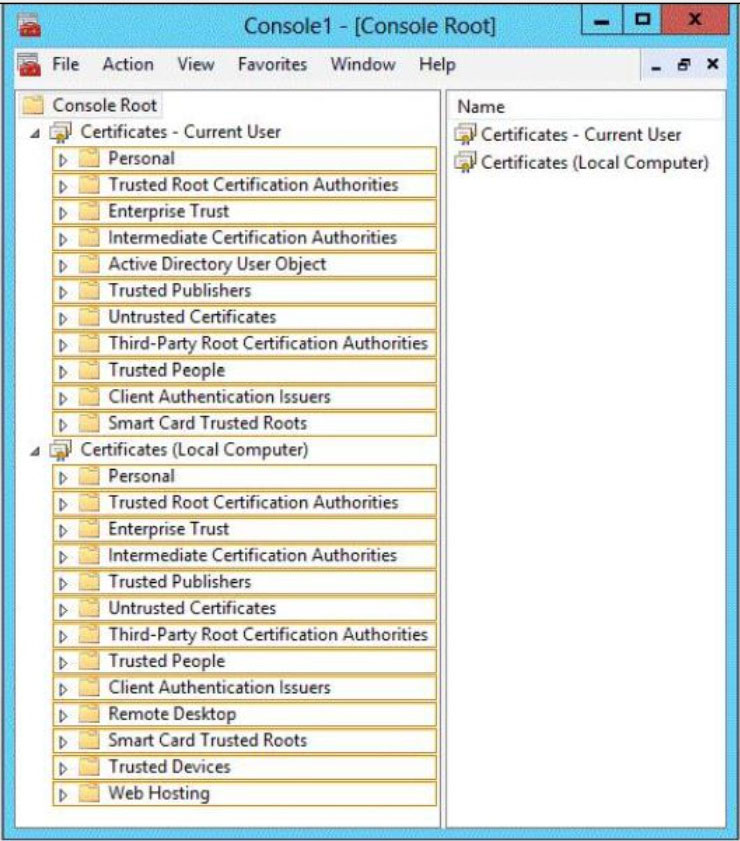 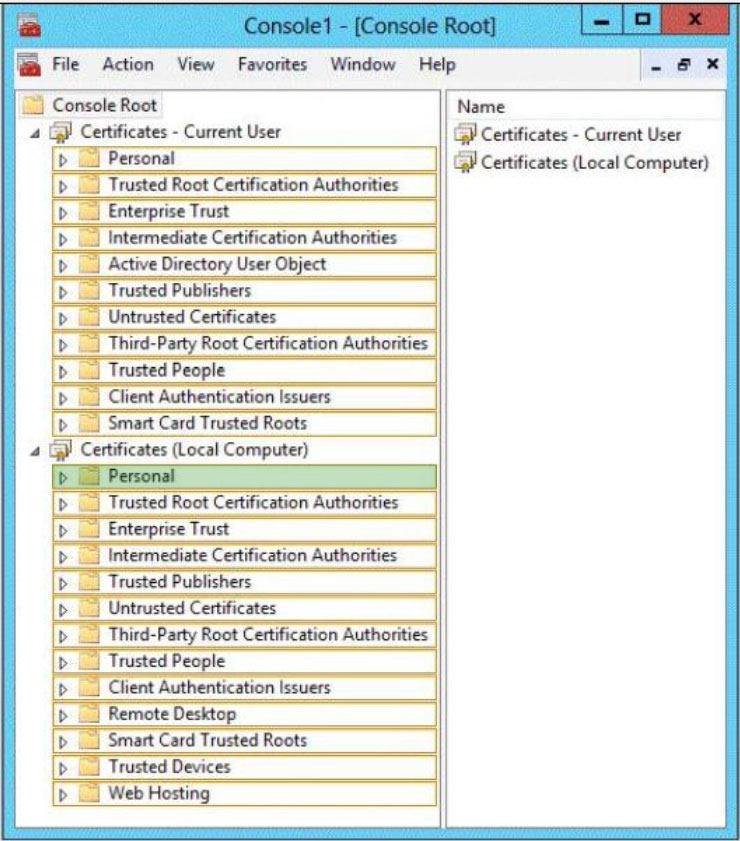