You need to implement a solution that meets the resiliency requirements of the customers.
What is the best approach to achieve the goal? More than one answer choice may achieve the goal. Select the BEST answer.

Explanation:
All of the metadata for any of the virtual machines of Customer1 must not be stored in
Windows Azure. So we cant use Hyper-V Recovery Manager.

You need to implement the resiliency requirements for the Hyper-V hosts.
Which four cmdlets should you run in sequence? To answer, move the appropriate cmdlets from the list of cmdlets to the answer area and arrange them in the correct order. 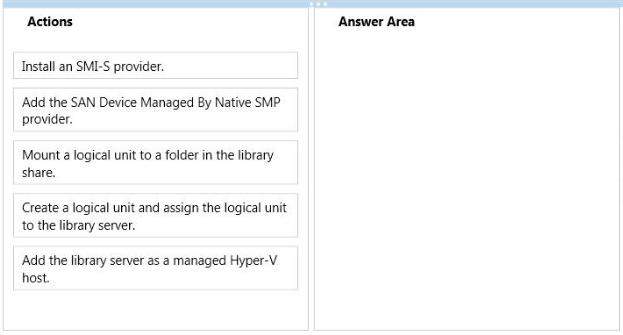 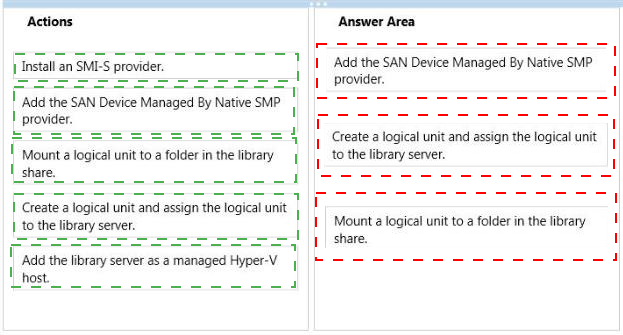 You create a virtual machine template that has the following properties: 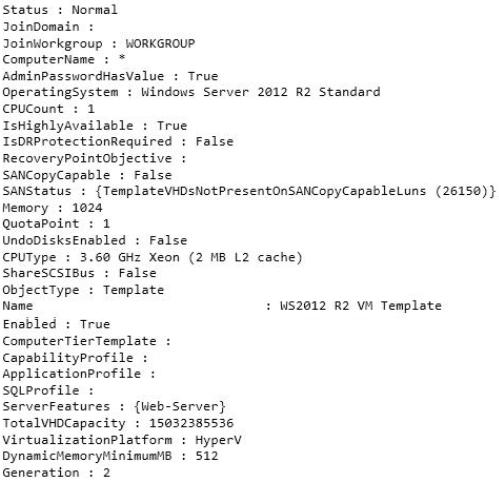 Use the drop-down menus to select the answer choice that completes each statement.

You need to recommend a solution to ensure that Customer1 will be able to establish a site-to-site VPN connection between its on-premises private cloud and its hosted private cloud.
Which three actions should you recommend performing in sequence? To answer, move the appropriate actions from the list of actions to the answer area and arrange them in the correct order.

You obtain a Client Authentication certificate.
You need to recommend a solution that meets the manageability requirements of
Customer2.
From where should you recommend performing the required tasks? To answer, drag the appropriate locations to the correct tasks. Each location may be used once, more than once, or not at all. You may need to drag the split bar between panes or scroll to view content.

You need to recommend the configuration for Customer1 to ensure that the customer can deploy a copy of an on-premises virtual machine to Windows Azure.
Which three actions should you recommend performing in sequence? To answer, move the appropriate actions from the list of actions to the answer area and arrange them in the correct order. 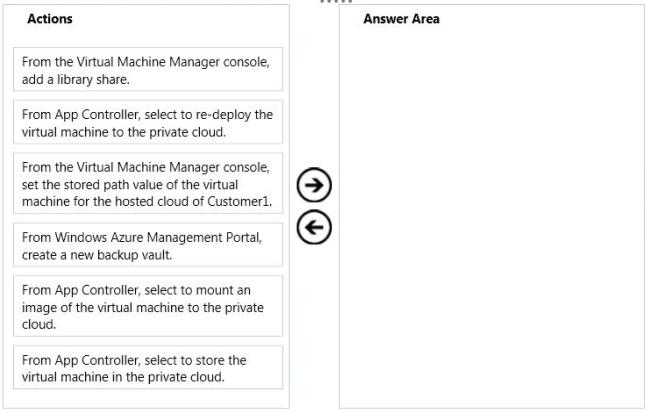 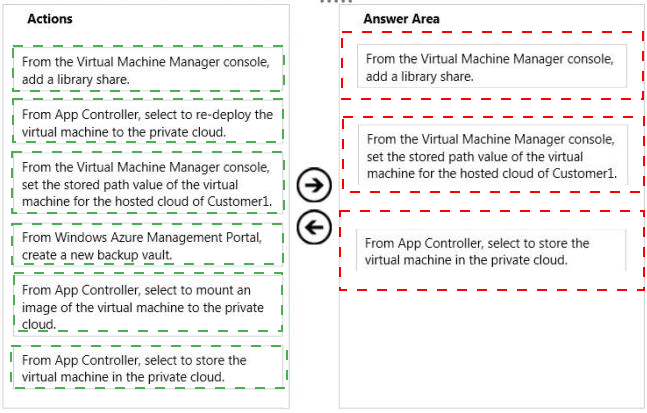 Note:
We need to ensure that the customer can deploy a copy of an on-premises virtual machine to Windows Azure.
So we first need to create a library share (box 1) then configure the stored path to point to the library share (box2).
A VM that will be copied must first be stored. This puts the VM into a saved state and exports the VM and configuration to the stored-VM path location (box 3).
When that is done, the customer can invoke the COPY VM operation within App controller to copy the VM to Windows Azure.

You need to recommend a solution for the management of the iSCSI storage.
Which four actions should you recommend performing in sequence? To answer, move the appropriate actions from the list of actions to the answer area and arrange them in the correct order. 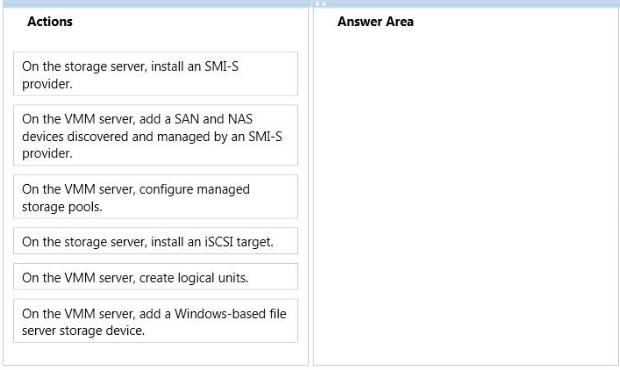 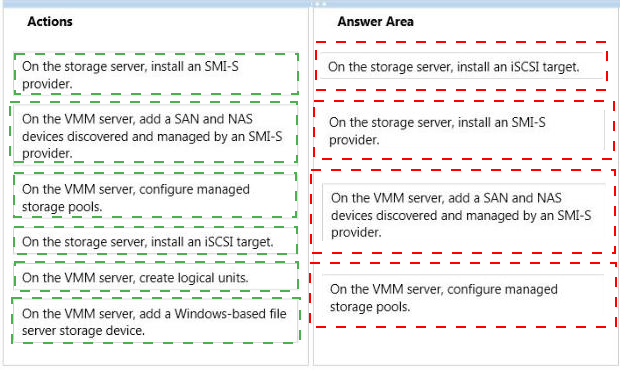 You need to recommend a solution that meets the manageability requirements of
Customer1 after a stamp and a tenant object for Customer1 are created in Service Provider
Foundation.
From which server should you recommend performing each task? To answer, drag the appropriate servers to the correct tasks. Each server may be used once, more than once, or not at all. You may need to drag the split bar between panes or scroll to view content. 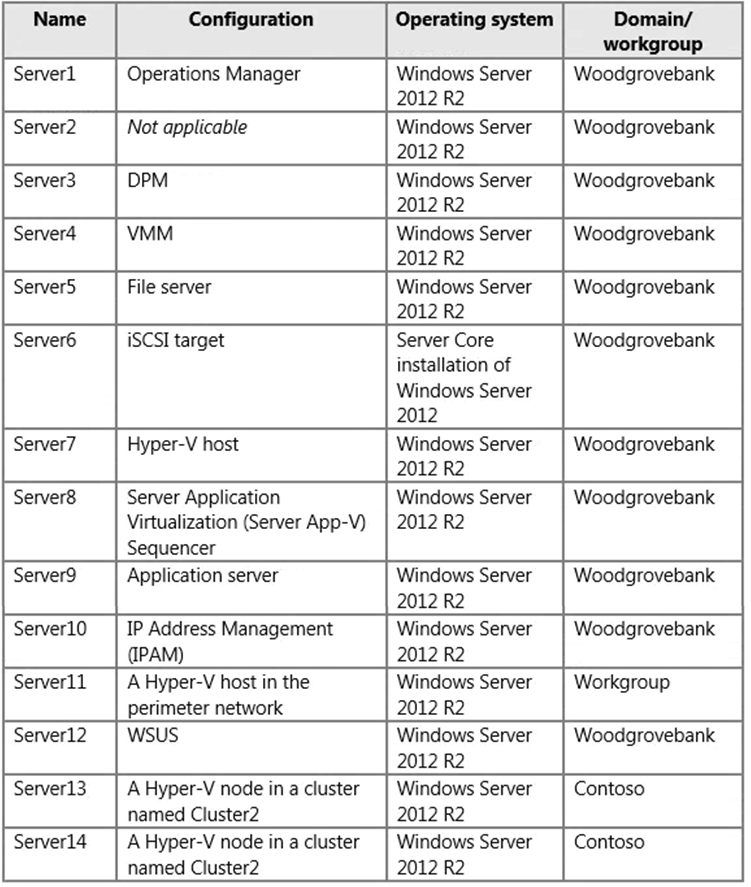 Server5 and Server6 were added to VMM by using explicit user credentials. A Windows update named Update1 is part of the baseline assigned to All Hosts. Server3 is configured to have a 2-TB storage pool. Tapes are used for long term backup. An application named App2 is installed on Server9. App2 requires complex installation and manual setup. Requirements Planned Changes ? Deploy Service Manager. ? Integrate Orchestrator and Service Manage

You need to deploy a virtual machine to provide external connectivity for the virtual machine networks. The solution must meet the connectivity requirements.
Which four actions should you perform in sequence? To answer, move the appropriate actions from the list of actions to the answer area and arrange them in the correct order. 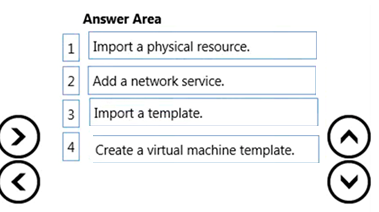 Create a virtual machine template
(Step 2) You can add a virtual switch extension, such as a NVGRE gateway, by running the
Add Network Service Wizard. 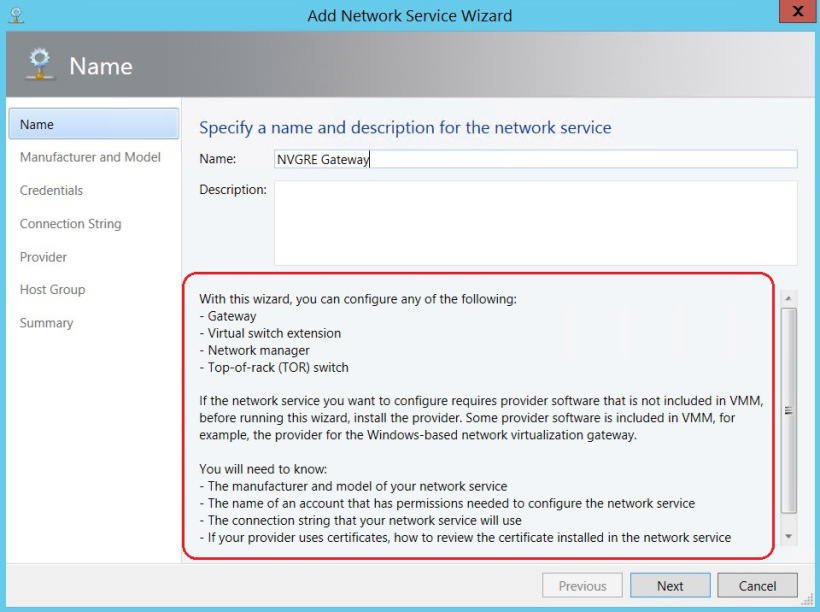 You need to implement VMM IPAM to meet the manageability requirements.
To which two groups should you add WOODGROVEBANK\vmmuser1?

Explanation:
Before you can add an IPAM server to your configuration in VMM, you must perform the following actions:
1. (this has already been done here) On a server running Windows Server 2012 R2, install the IPAM feature by using Add Roles and Features (in Server Manager) or Windows
PowerShell commands. Then configure the IPAM server as described in the relevant IPAM documentation.
2. Create or identify a domain account and, to avoid issues with expiration of the password, ensure that the account is set to never expire. Then, on the IPAM server, ensure that the account has at least the minimum necessary permissions by adding the account to the following two groups:
/ IPAM ASM Administrators: A local group that exists on all IPAM servers, and provides permissions for IP address space management (ASM).
/ Remote Management Users: A built-in group that provides access to WMI resources through management protocols, such as WS-Management through the Windows Remote
Management service.
Scenario:
* Use a domain account named WOODGROVEBANK\vmmuser1 to view and modify the IP address space in IPAM.
* Server4 is a VMM running Windows Server 2012 R2
* Server10 is IP Address Management (IPAM)
Reference: How to Add an IPAM Server in VMM in System Center 2012 R2 https://technet.microsoft.com/en-us/library/dn249418.aspx

You need to ensure that you can manage Server11 according to the manageability requirements.
In the table below, identify which action to perform on each server.
Note: Make only one selection in each column.

You need to design the Orchestrator infrastructure to meet the manageability requirements.
The design must minimize costs.
How many of each component should you include in the design? To answer, select the appropriate options in the answer area. 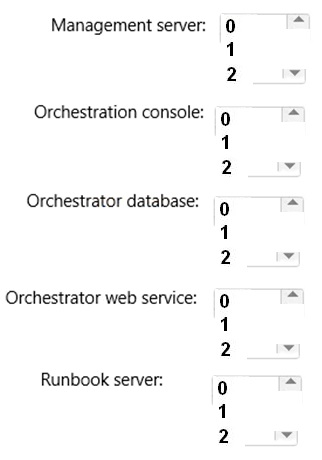 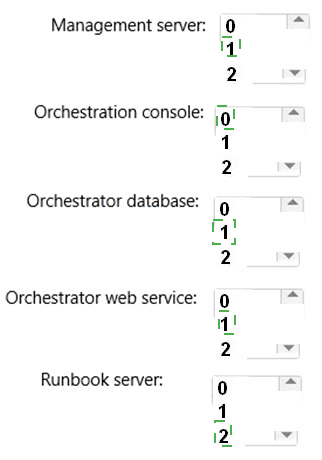 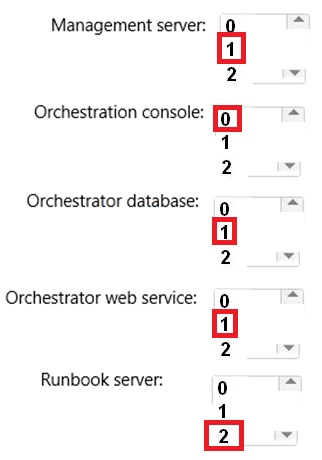 You need to recommend a solution to deploy App1 to meet the application requirements.
What should you include in the recommendation?

Explanation: An application package can contain settings to be entered when you configure the service for deployment. To format this type of setting, enter the parameter in the Value field, in this format: @<SettingLabel>@. For example, you might prompt for the instance name of a SQL Server for a SQL Server database tier application by using the parameter @[email protected]
Scenario: Deploy five instances of a multi-tier application named App1 by using a VMM service template. Each instance will have different deployment settings.
Reference: How to Create an Application Profile in a Service Deployment https://technet.microsoft.com/en-us/library/hh427291.aspx

Overview -
A.Datum Corporation is a consulting company that has two offices. The offices are located in Seattle and Los Angeles.

Active directory -
The network contains a single-domain Active Directory forest named adatum.com.
All of the users in the research department are members of a group named Research.

Server Infrastructure -
Each office has one data center. All of the servers in both of the data centers run Windows
Server 2012 R2. Each office contains a private network and a perimeter network. The private network and the perimeter network are separated by a firewall.
A.Datum has a pilot implementation of a private cloud in the Seattle office. The relevant servers in the Seattle office are configured as shown in the following table.

Server7 is a member of a workgroup. Server7 is located in the perimeter network of the
Seattle office.
Key management for VMM uses a local store.
VMM and Operations Manager use Server3 as a database server.

Administrative Configuration -
The network has the users described in the following table. 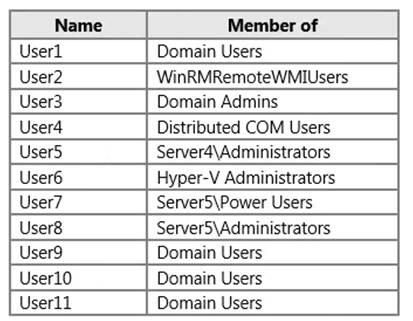 VMM contains two host groups named Seattle and Los Angeles. Server6 is in the Seattle host group. Currently, Server7 is not managed by VMM. The Los Angeles host group is empty.
Four user roles are created in VMM as described in the following table.

Planned Changes -
A.Datum plans to implement the following changes:
-> Connect the Seattle data center to Microsoft Azure.
-> Extend the on-premises data center and create a hybrid cloud.
-> Use Server8 to provide 10 TB of iSCSI storage for storing virtual machines.
Cloud Infrastructure Requirements
A.Datum identifies the following cloud infrastructure requirements:
-> Add Server8 to a storage fabric.
-> Add file shares from Server5 to a storage fabric.
-> Ensure that all of the private cloud components are highly available.
-> Ensure that the servers in the perimeter network of the Seattle office can be monitored by using Operations Manager.
Cloud Manageability Requirements
A.Datum identifies the following cloud manageability requirements:
-> The principle of least privilege must be used.
-> The virtual machines in the hyb

You need to prepare the environment to ensure that maintenance mode can be implemented to meet the cloud manageability requirements.
What should you do on Server1 and Server2? To answer, select the appropriate options in the answer area.

Pre-reqs to cover:
PowerShell 2.0 should be on all servers as they should be Server 2008 R2 SP1 or later.
Install the OpsMgr Console on the SCVMM server (Server1 here). This is needed for the
SDK binaries for SCOM connections
Ensure you have the IIS and SQL MPs in place in SCOM (Server 2 here), as SCVMM
MPs have dependencies.
Scenario:
* If VMM puts a Hyper-V host into maintenance mode, Operations Manager must put the
Hyper-V host into maintenance mode automatically.
* Server1: System Center 2012 R2 Virtual Machine Manager (VMM)
* Server2: System Center 2012 R2 Operations Manager