When using a Cisco Catalyst 9800 Series Wireless Controller, which statement about AutoQoS is true?

An engineer must implement rogue containment for an SSID. What is the maximum number of APs that should be used for containment?

What is the maximum time range that can be viewed on the Cisco DNA Center issues and alarms page?

An engineer is implementing a FlexConnect group for access points at a remote location using local switching but central DHCP. Which client feature becomes available only if this configuration is changed?

What is the default NMSP echo interval between Cisco MSE and a Wireless LAN Controller?

An engineer configures a Cisco Aironet 600 Series OfficeExtend AP for a user who works remotely. What is configured on the Cisco WLC to allow the user to print a printer on his home network?

When implementing self-registration for guest/BYOD devices, what happens when an employee tries to connect four devices to the network at the same time?

An engineer is following the proper upgrade path to upgrade a Cisco AireOS WLC from version 7.3 to 8.9. Which two ACLs for Cisco CWA must be configured when upgrading from the specified codes? (Choose two.) 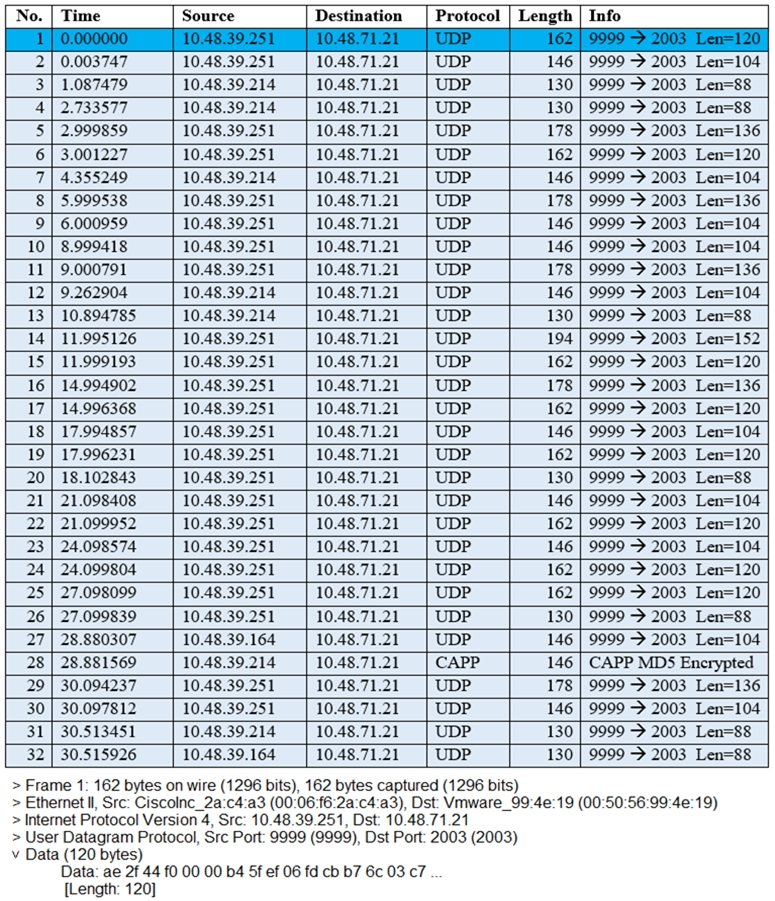 Refer to the exhibit. The image shows a packet capture that was taken at the CLI of the Cisco CMX server. It shows UDP traffic from the WLC coming into the server. What does the capture prove?

A wireless engineer needs to implement client tracking. Which method does the angle of arrival use to determine the location of a wireless device?

An engineer is implementing Cisco Identity-Based Networking on a Cisco AireOS controller. The engineer has two ACLs on the controller. The first ACL, named
BASE_ACL, is applied to the corporate_clients interface on the WLC, which is used for all corporate clients. The second ACL, named HR_ACL, is referenced by
ISE in the Human Resources group policy. What is the resulting ACL when a Human Resources user connects?

Which AP model of the Cisco Aironet Active Sensor is used with Cisco DNA Center?